5 Things to Know About An Asphalt Overlay 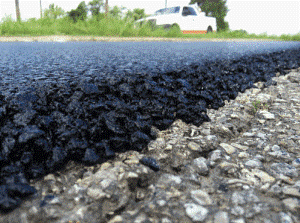 What is an asphalt overlay?

Very simply, an asphalt overlay is a method in which an existing asphalt surface is paved over with a new asphalt cross section.

How is an asphalt overlay constructed?

This depends on the project, but usually the first process involves milling.  A machine known as an asphaltic mill will “shave” the top of an asphalt surface down to enable the new asphalt to match existing asphalt, curb and gutter, sidewalks, or concrete pads.  The mill most always shaves the existing asphalt down to the thickness that the overlaid surface receives.  Areas that cannot be accessed by the mill will be removed.

After that, most asphalt overlays require removal and replacement of the very poor areas in a process known as base patching.

Next, a street sweeper prepares the surface and a tack coat adhesive is applied.

After the area is prepared, the first layer of asphalt, known as the “leveling course” is applied.  This layer helps re-grade areas of the existing asphalt that may have drainage issues.  Thickness of this layer may vary because of the inconsistencies of the existing surface.

Finally, the surface layer of asphalt is applied.

How thick should an asphalt overlay be?

The thickness of an asphalt overlay depends on a couple variables.

First, the existing asphalt’s condition plays a big role.  The more damage to an existing asphalt surface, the thicker the overlay should be.  A very thick overlay is usually referred to as a structural overlay

Second, the existing asphalt’s drainage is a major factor.  If the grade is flat and drainage is slow, this may mean that a thicker amount should be placed at the beginning of the downward slope.

Why is this alternative a “beacon of hope”?

An asphalt overlay is a great alternative to full reconstruction for a few reasons.

For one, it may be considerably less expensive than a full reconstruction, depending on the existing site conditions.

Further, there are very few unknowns associated with undercuts, which could be stressful and very costly.

Finally, it is more convenient.  Most projects are completed in days, not weeks which may be a benefit for a business that wants the fastest “least amount of headaches” possible.

What is the difference between an asphalt overlay and a resurfacing?

Trick question!  There is not a difference between these commonly mixed up words. Many times the word resurfacing can be misconstrued with seal coating, which provides mainly aesthetic and protection value rather than structural repair.

While all these characteristics are helpful, it must be stated that one shortcoming of an asphalt overlay is that it doesn’t last as long as a full reconstruction.

But, an asphalt overlay is a great option for pavement surfaces when:

Suburban Asphalt is a family owned and operated paving company founded in 1965 by brothers Terry (Sr.) and Roger Buss. We are located in Franklin, WI and currently provide asphalt services to almost all of Southeastern Wisconsin.

To best serve you, please answer the following